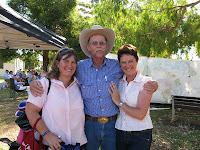 The WA Bush Poets held their 15th annual Poets in the Park showcase at Wireless Hill Park, Ardross this Australia Day. Fifteen poets from all over the State performed a mixture of their own and traditional pieces from Australian poets such as Lawson and Paterson.
Here I am with poets Irene Connor and Corin Lynch from Jurien. Regular ABC listeners will know Corin from his contributions to The Dawn Patrol on Perth's ABC 720.
It was a warm day but an enthusiastic crowd and once again I met some lovely people and a lot of poets I had heard of but never seen, including Peg Vickers from Albany. I have asked Peg and Corin to contemplate joining us in Esperance in October for the Bush Poets' Breakfast at the Esperance Districts Agricultural Show. They do some great stuff that is very entertaining.
One of the best parts of the day was meeting Meg, and old friend I haven't seen for years who had heard me on Eoin Cameron's breakfast show that morning (reciting Banjo Paterson's The Geebung Polo Club) and had come up to Wireless Hill Park to see me. The power of radio!
Posted by Victoria Brown at Friday, January 29, 2010 No comments: 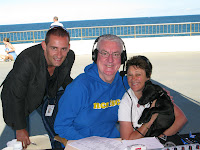 I had a great morning with ABC 720 Breakfast Host Eoin Cameron and his producer Brad McCahon at the North Cott Surf Club when they had an outside broadcast from the foreshore a few weeks ago.

Here we are, Brad, Eoin, me and Mr Toad, (Tiff's Staffy Kelpie cross). It was the morning of the Liberal Party leadership spill so the phone lines were jammed with regular ABC listeners saying "Get this political stuff off the radio and get back to the normal program. The results of the spill can wait til the news!"
Posted by Victoria Brown at Friday, January 29, 2010 No comments: