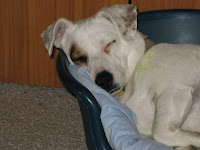 This is Dodger looking the epitome of virtue and good behaviour after a hard day's work on the farm.
Not so good today were some of the ABC Radio Celebrity Dog Obedience entrants at this year's Perth Royal Show.
Listeners of ABC Radio and spectators at the show were entertained with an extraordinary exhibition of behaviour from the celebrity pooches and their owners as they attempted to wend their way through the tasks set by the judges.
There was Breakfast presenter Eoin Cameron with his 'star struck psycho spaniel' Taj, claiming he was, quote "a little disappointed" with his canine companion's performance, citing "performance anxiety" ( referring maybe to the pair of them and not just his pooch). Taking the competition very seriously was Mornings presenter Geoff Hutchison and his mutt Milo, but the crowd pleaser was Drive's Russell Woolf, who unashamedly worked the crowd at every opportunity to give his dog Banjo the best advantage, resorting to good old fashioned bribery by dropping the judges off a bowl of his hand made rum balls before the competition had even started.
Dogs who didn't want to walk the plank were dragged along it. Dogs who were height challenged were lifted up to eat the sausage suspended from the string, and dogs who refused to jump through rings or run through tunnels were tossed through like cabers by their owners in an attempt to claim first prize.
I'll be talking to Cammo on his show tomorrow morning and performing 'Simmo's Last Laugh', a poem about a very naughty working dog who took off in his owner's ute and drove it into a salt lake. The poem was inspired by the true story of London Capitol Radio DJ Johnny Vaughan, whose dog drove his Maserati into the back of a rubbish skip!
Taj maybe able to open a fridge and help himself to the contents of the third shelf, but can he drive a ute? I doubt it.....
Posted by Victoria Brown at Tuesday, September 29, 2009 No comments:

If you enjoyed Fleur McDonald's "Red Dust" then add Bronwyn Parry's "Dark Country" to your list of books to read in the near future.

When the police vehicle she is driving breaks down one night on a quiet country road near Dungirri, New South Wales, local police sergeant Kris Matthews flags down a passing car. She gets a lift into town with Morgan 'Gil' Gillespie, a man who appears somewhat guarded and secretive, but does not seem out to harm her. What she doesn't know is that the residents of Dungirri have branded this man a murderer for the last eighteen years, and are in no mood to welcome him home to the small country community.

Things take a turn for the worse when the body of a dead woman is pulled from Gillepsie's car boot the following morning. However, one thing Kris Matthews is certain of is that Gillespie is not the murderer. Why? Because the body wasn't in the boot the previous night when they drove into town, and Gillespie has the best alibi a man could want.....Sergeant Kris Matthews herself.

So begins a fast paced novel of crime and romance as Kris and Gil embark on a journey to discover who the murderer is. This novel is packed with action, organised crime, and police corruption as the reader is drawn through an intriguing unravelling of Gillespie's past and his ties to this small country town.

Set in a dramatic Australian landscape, "Dark Country" is one of those books you hope to read on a wet weekend, curled up on the sofa, whilst disappearing into its pages for a ripping read of thrills and spills. Pure, unadulterated entertainment of the 'popular fiction' genre. Long may it live!

Be prepared for bodies walled up in deserted farm houses, bodies pressed up against one another in unbridled passion and bodies of evidence all hurtling towards a dramatic climax.

Just the book I was looking for after Christos Tsiolkas's "The Slap."

Review of The Slap by Christos Tsiolkas

This book is a 'must read'.
I did not pick it up because it was short listed for the 2009 Miles Franklin Literary Award, or because it was winner of the 2009 Commonwealth Writers' Prize for Overall Best Book. I picked it up after hearing a review of 'The Slap' on ABC Radio, and the subject matter intrigued me.
At a suburban barbecue in Melbourne, a man slaps a small boy who is not his own. This action has an immediate effect on those gathered in the back yard that 'lush late-summer afternoon'. It not only shuts down the barbecue immediately, but sends shock waves and reverberations through the group of family and friends who are present and who are either directly or indirectly affected and influenced by the slap.
The novel is told through the eyes and points of view of eight of the guests present at the barbecue. Using this form Tsiolkas has written a most thought provoking and disturbing comment on a modern twenty first century mixed ethnic group of family and friends living, loving, loathing and lusting in modern Australian suburban society.
I have to say that when I put the book down I thought "What a horrible group of people. I hope I never have to meet or associate with any of them." With the exception of the two teenage characters Connie and Richie; Aisha, the hostess that fateful afternoon; and Anouk, I wanted to get up and slap everyone else who stood up and gave their view point on the event.
The person I wanted to slap the most was the damned child! Spoilt, indulged, demanding and totally undisciplined I was fighting the urge to slap the little bastard myself. But had I been at the barbecue would I have slapped him, a child that was not my own, even if he was threatening to belt my child with a cricket bat? Definitley not, but then neither would I have associated with either of his ghastly parents.
This book will get you asking yourself many questions about how families of mixed ethnic origins manage to balance their beliefs, desires, dreams, traditions and expectations of one another and still manage to live together. Tsiolkas gives the reader a jaw dropping vision of a sector of the Australian middle class, and I wouldn't want to be living in it I can tell you.
The language is coarse, the sex is frenetic, the pace is suberb. A novel about loyalties, the nature of happiness and the compromises one has to make in order to attain that happiness.
After you've finished it, might I suggest you ring a friend who has also read 'The Slap' and enjoy a good dissection of the novel over a coffee or a glass of wine.
Oh, and read something light afterwards.......
Posted by Victoria Brown at Sunday, September 13, 2009 1 comment: 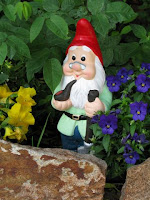 This is Ned the Gnome. He was given to me by Mark and Jan for my birthday with a message on the card that read:
"Please love me and do not break me and make out it was an accident."
He resides in the garden as you can see. I was reminded of Ned today whilst in Bunnings. I had one of those wonderful 'inter reaction with a total stranger' moments there this morning.
I was at the check out with my wares, some rather nice potted grasses, which were being admired by the lady scanning my purchases.
"How tall do they grow?" she enquired. At which point a man joined me in the line with his punnet of vegetable seedlings. He admired the grasses too. He was an interesting looking character with a twinkle in his eye.
"About fifty centimetres" I replied, placing my hand above the bench by my estimation of fifty centimetres. "About this high, you reckon?" I asked them both.
"Yup!" said the character, as his tufty hair poked somewhat tuftily, funnily enough, from underneath his rather colourful beanie "About as high as my G-nome" (pronouncing it as in G-orilla)
"I have G-nome too!" I cried out with delight! "Mine is called Ned the Gnome."
"I call mine 'Arsehole' " he replied "As he keeps turning all the lights on and off in the house."
Then, giving me a cheeky wink, he went on his way, leaving me totally speechless!
Posted by Victoria Brown at Tuesday, September 08, 2009 1 comment: 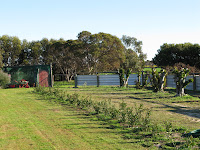 At last the fence is finished around the house, and the new garden is offered a bit of protection.

We used posts and tin sheeting for a rustic effect on the eye, a sensational feeling on the pocket, and to tie in with the stables which you can't see in this photo, but are to the right of the fence. It's all starting to come together and an annihilation and rejuvenation of the old garden has given us a great project at the homestead.

We went over to Scadden on Saturday and saw a beautiful garden owned and tended by the Thomas's. Sensational! I was swept up in the wonderful box hedges, amazing array of plants, olive trees, weeping mulberry trees, mop tops, crystal clear swimming pool and grass tennis court complete with pavilion. Quite breath taking. It made me want to rush home and start frenetically and frantically working on my own garden, and ours needs a lot of work let me tell you. The pool, for example, has water in it, but it is black, three inches deep and full of sticks, leaves, dead frogs and mosquitoes.

So on Sunday we decided to finish the fence before attacking the pool. In my frenzy to help shift a pile of posts off the trailer I dropped one on my foot and am now nursing a broken toe. I then took a large piece of skin off the middle finger of my left hand moving a selection of wooden rails, and capped off the day by driving a piece of weld mesh wire into my skull as I bent down to plant some wormwood in the chook house.

Given that I had also started the day with a extremely energetic walk for over an hour, I was totally crippled by 6pm and a strong gin and tonic was called for. I am subsequently looking for a strong, youthful virile type with steel capped boots, gloves and head protection to work in the garden.

Apply within.
Posted by Victoria Brown at Tuesday, September 01, 2009 No comments: