OMG! What has the poor old Duchess done now? Prince Andrew must be rueing the day he trotted her down the aisle and out onto the steps of Westminster Abbey.
Her self confessed "serious lapse in judgement" in offering access to her 'ex' in exchange for cash has got the British tabloids accusing her of "selling the country, the monarchy and herself down the river." The poor old Thames....how can it cope with the load?
Fergie's a month older than me, and that's probably where our similarities end, apart from the fact we're both Poms with plummy accents, and we both turned 50 last year. I gather her party plans for last October were scaled down due to money concerns. A low key dinner at The Lanesborough Hotel in London with family and friends was what she got. A coupla chardies and a carton of Ted's in the shearing shed is what I call low key.... In contrast my celebration was with 'the girls' at a local restuarant, and well within my budget. However there wasn't a Lisa Marie or Pricilla Presely to be seen. Must do something about that....
Poor girl, her divorce settlement is a paltry $26,000 p.a. compared to her sister-in-law's $35 million, so no wonder she's feeling a tad short changed. Tabloid photos show her "hunched over a wad of cash and a wine bottle." Sounds seedy enough until you discover the wine was probably a ninety five quid bottle of burgundy which raises the tone somewhat.
Anyway, her behaviour's got me thinking. I'm willing to sell access to my husband for $50 and a bottle of Penfold's Grange. Well.......I don't want to sound too cheap and nasty.
Call me.....
Posted by Victoria Brown at Tuesday, May 25, 2010 2 comments: 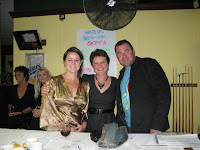 I thought judging horses and cake competitions was difficult enough, but last night I had the daunting job, along with Naomi Bailye and Marcus Tromp (pictured left), of judging the regional finals of the Karaoke World Championships Australian Trial. This was the first round to determine who will compete in the State finals, and then go on to represent WA in Surfer's Paradise for the Nationals, with the winner of that competition going to Moscow for the World Championships.

It was an action packed night with an horrendously tight finish that saw the top three place getters separated by a couple of points. There were some fabulous renditions from all competitors, some of the more memorable for me were from Renae, Taryn, Sonja, Steve, Marlina and Kerralyn (who could forget that gorgeous get up for 'Does Your Mother Know'?)

It was a great night out that had me dancing and whooping and cheering on my stool as I got caught up in the atmosphere of a great pub/club karaoke competition. Someone said to me "Aren't you judges supposed to be impartial?" Maybe they expected us to be dead pan or dead from the neck down. Sorry.....'no can do' on a night like this when entertainment, great vocals and crowd participation and enthusiasm is the name of the game. The music and their heart and soul performances be they ballard, country, rock or pop were pumping through my system too.

My only regret for the night? That we couldn't send more than two people to the State finals in Perth, and I empathise with those who didn't make it 'cos I know what it feels like. You're looking at someone who missed out by half a point on $5000 and a National title in Sydney a few years ago ( for bush poetry not karaoke.)

It makes me want to grab the karaoke mic and start singing one of my favourite numbers....

"I get knocked down, but I get up again"

Good luck in the State finals guys. Meanwhile I can feel a new phase coming on.....